The wood-wide web – a story too good for its own good?

I suspect that you have been exposed, in some way or another, to an idea often known as the wood-wide web. The basic idea is that trees are connected underground via networks of so-called mycorrhizal fungi that nestle into roots, enabling trees to swap chemicals, warning signals, communiqués and more. In the time I’ve been writing about trees and forests, the wood-wide web has breached the walls of science and seeped into the popular culture, from movies to hit TV shows to a little free library’s worth of books for readers young and old. Even people who know almost nothing about trees know that trees talk to each other.

I believe I first encountered the idea in a Michael Pollan New Yorker story about plant intelligence. It featured heavily in German forester Peter Wohlleben’s runaway bestselling book The Hidden Life of Trees (my review), yet again in The Overstory (another runaway bestseller; my review), and then a 2020 New York Times Magazine story. I will admit to having a contrarian streak, and when I see an idea promoted over and over – even more so when each iteration seems to stray further from what I feel scientific evidence can support – my skeptical antennae go up. If I’ve learned one thing in 10 years of science writing, it’s that nothing is ever as simple as we want it to be – not by a long shot.

All that primed me for a tweet posted this summer by a scientist named Justine Karst. She was announcing the abstract of a talk she was planning for a conference, with the title “The Decay of the Wood-Wide Web?” I reached out to Karst and learned that she, along with two colleagues, had reviewed the published literature and concluded that much of the supposed evidence for the wood-wide web had been misinterpreted or exaggerated, and that many commonly made claims had no support. Scientists – a discreet and diplomatic bunch on the whole, at least publicly – rarely produce such direct critiques, so needless to say, I was intrigued.

I ended up covering the debate for the New York Times. It also grabbed the front of the Tuesday Science section – a first for me. 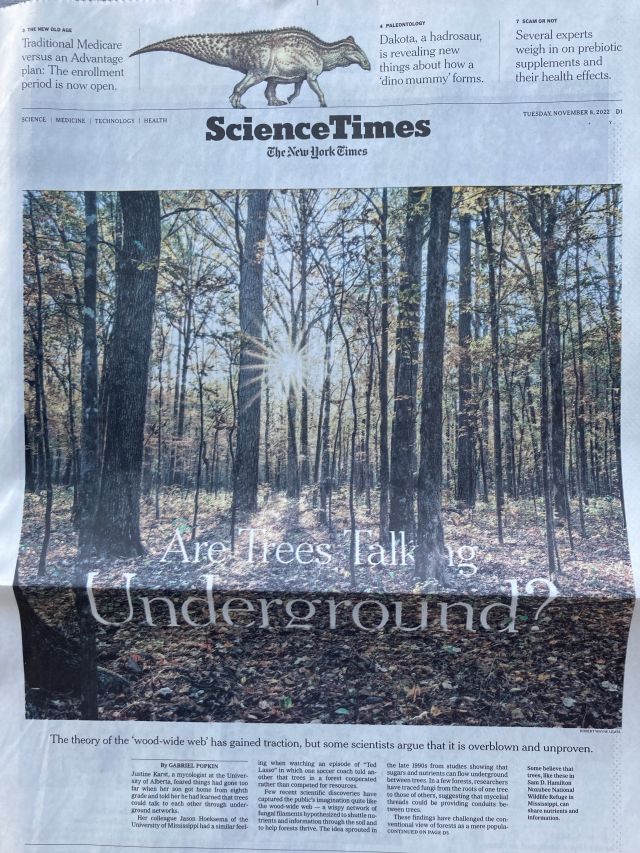 As always, I tried to be even-handed, presenting the evidence for each position. However, I recognize that mine is probably the most critical story written about the wood-wide web, if for no other reason than that most writers have embraced it more or less wholeheartedly and uncritically. (More on that later.)

Some things I learned that surprised me and might surprise you:

People want to believe in the wood-wide web. It makes them feel good. I’ve thought a lot about why this is. I think part of it has to do with timing. The wood-wide web blew up alongside the rise of Donald Trump and other right-wing, authoritarian leaders, and the notion of forests as cooperative, benevolent societies offered a comforting alternative to our increasingly fraught, fractured, competitive and, frankly, unpleasant human society. (Another view is put forward by the scholar Rob Nixon, who sees in the wood-wide web an alternative to the predominant capitalist paradigm that has come to dominate our society.)

My friend, the rabbi Laura Bellows, also points out that the wood-wide web’s popularity exploded during the covid pandemic, when we were deprived of much of our usual human interaction. Perhaps the anthropomorphizing of trees – something that has grated on a lot of scientists, and on me – has helped people feel connected to them, and less isolated. If so, that could be a good thing.

Social scientists also recognize a phenomenon called motivated reasoning. We may wish to believe that we seek the truth whatever it may be, but the fact is, it’s much easier to accept evidence that aligns with what we already believe or want to believe than it is to accept evidence that challenges our beliefs or preconceptions. Many people are attracted to a longstanding, romanticized view of trees and forests as benign and benevolent, and the wood-wide web discourse caters perfectly to that.

And then there’s what I call the narrative imperative. We humans are attracted to narratives; indeed, we seem to need them. They’re one of our primary ways of making sense of the world, from Homer and the Bible to today. Facts and data are poor second cousins to narratives when it comes to grabbing people’s attention, which is why we writers embed information we want to impart in stories.

The wood-wide web has been a narrative gold mine. Simard has expertly curated her own story, in her memoir Finding the Mother Tree among other places, portraying herself as a lone voice in the (literal) wilderness taking on a male-dominated forestry industry obsessed only with profits. I was not surprised to learn that her book had been optioned for a film starring Amy Adams. Journalists too have gobbled it up, often seemingly eschewing their usual skepticism and objectivity in the face of a story that virtually sells itself. And authors like Richard Powers of The Overstory have taken inspiration from the wood-wide web to portray trees as pro-social protagonists set against selfish, short-sighted humans. My story, while perhaps more hard-nosed and rigorous than the norm, will not be making any novelists or Hollywood types swoon.

So where does this all leave us with respect to the wood-wide web? Let me first be clear that mycorrhizal fungi absolutely do partner with trees to swap nutrients for carbon; that this symbiosis is one of the most common and important in nature is not in dispute. I believe, as does Karst, that fungi likely connect trees in many forests, though whether this is a generic or more specialized behavior – and what it means ecologically – remain open questions. At any rate, there seems to be an obvious benefit for fungi to be in contact with many individuals who can provide them food. And it makes sense to me that fungi would sometimes give more to a young tree than they get in return (which has been interpreted as a “mother tree” helping its “child”), if it means that tree could later, as an adult, return the favor, so to speak. How fungi make such “decisions,” given that they do not have brains, is a fascinating question.

But for all the swapping and cooperating, there’s also plenty of fierce competition in the forest – for food, for water, for light and space. There are also many other types of fungi in forests, including parasites that take from plants without giving back and endophytes that live on plant leaves – a group whose lifestyle scientists, for the most part, don’t even begin to understand. The true story, as always, is complex and ever evolving. And there’s an interesting subtext here: This conversation has thus far been dominated by forest ecologists focused on the aboveground world of trees, who tend to see fungi as passive inter-arboreal conduits rather than coequal ecological players with their own interests and behaviors. Now the mycologists are speaking up, and putting fungi on the map.

As a side note, this story illustrates to me how important Twitter has become for scientific discourse and news gathering. I don’t believe there has ever been a medium that allows scientists to communicate in real time with peers all over the world. It’s like a global scientific conference happening 24 hours a day, 365 days a year, and we’re all allowed to listen in. In this case, I happened to be standing in the right virtual hallway at the right moment to catch a snippet of conversation that opened a door to a new story. If Twitter implodes, I don’t know what will replace it, and I do fear that for all of Twitter’s flaws, our public discourse will be poorer without it.

Posted in Uncategorized | Comments Off on The wood-wide web – a story too good for its own good?