This blog has been pretty inactive in 2015, but I figured I could at least post my 2015 roundup. Enjoy!

It’s been, among other things, a year of trees and forests. In June, for my first feature story in Nature, I reported on scientists’ efforts to measure how much carbon the world’s forests store, and how much more (or less) they’re likely to store in the future as the climate continues to warm. Despite decades of measuring trees with tapes and peering at forest canopies from airplanes and satellites, scientists are still grappling with a lot of uncertainty around this question, which is vital to efforts to predict and slow climate change. In a related story, I reported on an analysis released at last month’s climate talks showing that at least 20% of tropical forest carbon is in territories managed by indigenous people. And I recently profiled for APS News (incidentally the first publication I ever wrote science for) three physicists who are advancing the science of studying forests from the sky.

Moving closer to home… if you’ve hung out with me in the last three years, especially outdoors, you’ve probably heard me talk about the eastern hemlock tree, which is threatened by a tiny but deadly invasive insect called the hemlock woolly adelgid. I wrote a feature story for Science about efforts to control the adelgid and save some of the last old-growth forests in the eastern U.S. This was the culmination of more than two years of reporting and research, including visiting forests and scientists from Georgia to Massachusetts. While it was gratifying to write this story, the battle to save the hemlock is far from over, and I continue to look for ways to bring attention to this and other threats to our beautiful forests. 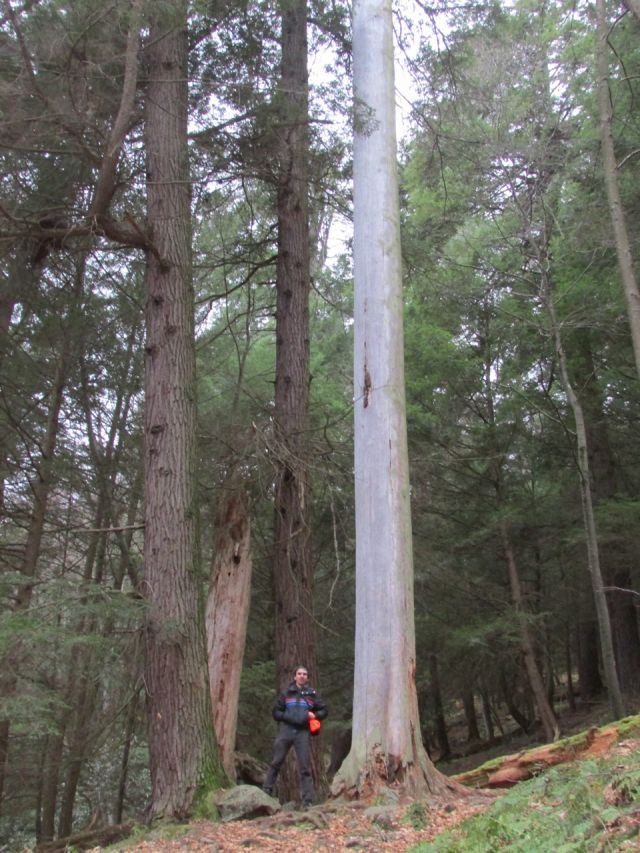 Among the hemlocks at Cook Forest, PA. Photo Emily Townsend

Along those lines, I will share some of what I’ve learned about trees and forests at an upcoming D.C. Science Café, probably on Tuesday, March 2, at Busboys and Poets’ 5th and K Street location in downtown Washington. I hope that some of you who are local will be able to attend. Matthew Hansen of the University of Maryland and Earl Eutsler of D.C.’s Urban Forestry Administration will also speak, and it should be a fascinating evening.When I wasn’t exploring forests, I might have been on the coast. This fall I wrote a feature story for Science on living shorelines, a strategy for preventing erosion while restoring rather than destroying coastal ecosystems. I also wrote my first story for Quanta magazine about marine ecologist George Sugihara, who uses chaos theory to predict the future of fisheries and other complex systems. (OK, I didn’t actually go anywhere other than the Ecological Society of America meeting in Baltimore for that story, but it was still a fun one.)

Speaking of water, despite living less than an hour from it, I haven’t spent nearly enough time on it lately. A fantastic outfit called the Institute for Journalism and Natural Resources helped correct this, by inviting me to travel up and down the Bay from Baltimore to Tangiers Island and learn about environmental issues that could lead to future stories. On the way I put on my first hazmat suit and set foot in my first chicken factory farm. (Chicken farming on Maryland’s Eastern Shore is one of the reasons the Bay is so polluted.) And lest the West Coast feel left out, I also fulfilled a long-held dream and hiked with a friend in the rainforest and along the beach in Olympic National Park—a beautiful park that has both 300-foot trees and beach! Highly recommended. 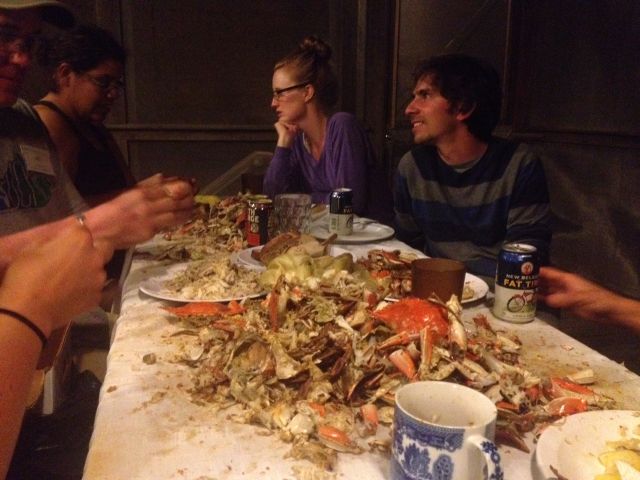 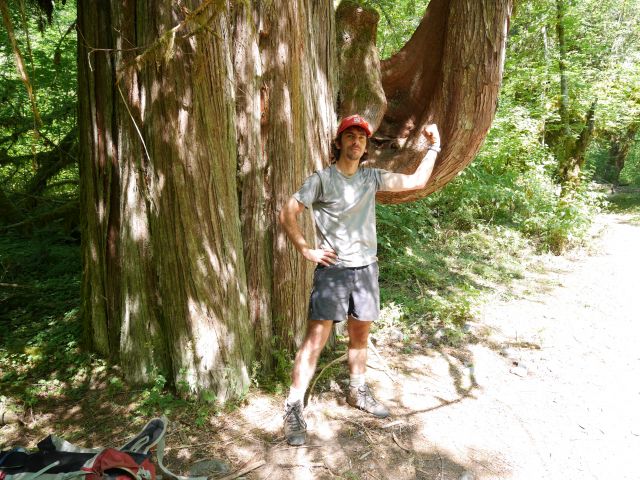 Me and a big tree in Olympic National Park, WA. Photo Naomi Goldenson

When I decided to become a science writer, one of my goals was to combine two areas of science that can seem far apart: physics, which I got my degree in, and biology, ecology and the environment, which I also find fascinating and care a lot about. Stories that do this have been among my favorite to report and write, as well as among those that generate the most interest from readers. This year I wrote two stories about physics and cancer (coincidentally published on the same day)—one for Nature on a research program that some say has lost its ambition, and one for Inside Science on the perhaps surprising health legacy of the atomic bombs.My latest exploration of the physics-biology interface is a hot-off-the-presses Nature feature story on “active matter,” a new class of materials that are based on biological building blocks and behave surprisingly like living cells, despite not having DNA and other components that define life as we know it. As far as I can tell, this is the first feature-length story that has been written on this topic, but I’m sure it won’t be the last.

I continue to stay connected with the universities where I studied, writing for Johns Hopkins Magazine about an oncologist who made a surprising connection between genetics and lung disease, and for Wesleyan Magazine about a world-class kayaker-turned-educator and the director of the Joint Quantum Institute (just down the road from me at the University of Maryland).

Once in a while I even write a blog post! My last one was on the last day we got any real snow around here. It’s about winter and where I live.

If you’ve ever read a description of a writer’s life, you know that much of it is spent at a desk, doing glamorous things like deleting words and poring over notes to get the exact wording of a quote. I can confirm that such descriptions are basically accurate. That said, I did get to travel a lot for work this past year, including Boston (twice) for conferences, North Carolina (twice) for stories, Texas, as well as Washington state (see above) and Europe for pleasure and to visit friends and family. I also took my first international reporting trip, to the Yucatán peninsula in Mexico, funded by a grant from the Society for Environmental Journalists. I will have a story coming out later this spring on an effort to use the Yucatán’s carbon-dense tropical forests as a bulwark against climate change. While I was there I took the opportunity to visit the ruins at Calakmul, smack in the middle of Latin America’s largest protected forest reserve outside the Amazon! 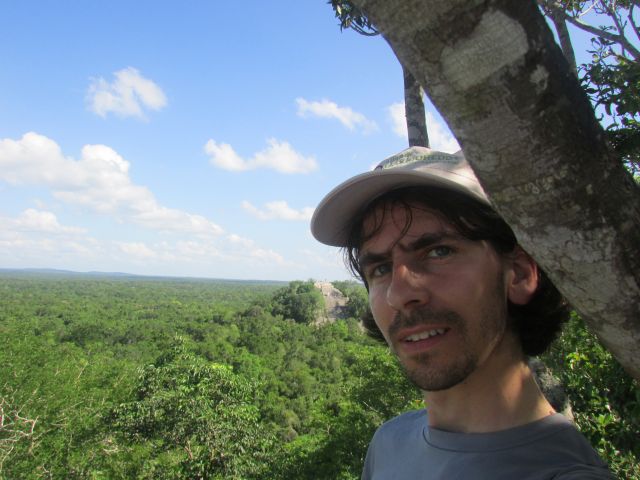 Sweating in the rainforest, Calakmul, Mexico. Photo by me!

Reporting on the scene in Mexico! Photo Peter Ellis

Being president of the D.C. Science Writers Association has also kept me busy—sometimes a bit too busy. Since I took the post this past April, we’ve organized dozens of tours, workshops and social events, and launched a new website. And we have a big few months ahead, with a huge science writer party planned during the upcoming AAAS meeting in February as well as our annual Professional Development Day on April 2. (The D.C. Science Café mentioned above is also a DCSWA event.) It has been a real honor to lead this nearly 30-year-old organization, which is run entirely by hard-working volunteers, and I look forward to seeing it continue to thrive after I hand over the ceremonial duck (get it, Duck-swa?) to the next president in April.

I know these year-end messages are supposed to be all positive and chipper, and there is indeed a lot to celebrate over the past year. But it doesn’t feel right to not mention some of the challenges as well. On a personal level, while being a freelance writer comes with enviable freedom, it also comes with no small amount of isolation, job insecurity, rejected or ignored pitches, and time spent wondering if my ideas are any good. It’s easy to feel alone in this, until I talk to any other writer and am reminded that we’re actually all in it together. I would really like to spend more time with people and less time in front of my computer screen in 2016, so whether you’re a writer or not, please be in touch!

I also want to say something about the challenges that face science writing, as well as independent journalism more broadly. I won’t belabor the well-documented reasons for these challenges, except to say that from a business standpoint newspapers and magazines have adapted poorly to the Internet era, which is why you probably pay more for your cell phone service than for all your print and online subscriptions combined. Even though some publications are getting by—for now—on Internet ads or backing from moneyed foundations or benefactors, I believe that in the long run, journalism needs to be valued and sustained primarily by readers, listeners and viewers—in other words, by you and me. My plea to you is, when you’re considering how to spend your discretionary income, please support journalism as much as you can. Of course I have a special interest in science and environmental journalism, which I think is vastly underfunded, to the detriment of our democracy and our society. But many other important parts of our world are also hidden in shadows, and will continue to be unless journalists are able to shed light on them.

OK, stepping down from my soapbox now. I really do plan to send more updates this year. For one thing, I’m contemplating launching a new science/environmental journalistic venture, and if I decide it’s worth pursuing, I will certainly announce it. I will also send an update when the science café details are confirmed. Thank you for reading all the way through, and I hope 2016 is off to a good start for you!

Posted in Uncategorized | Comments Off on My 2015 roundup — words, water, physics and trees